William “Little Troy” Lumpkin was a native of Harrisonburg, Arkansas. This gospel music songwriter, comic, and tenor singer sang with the Hartford Quartet, the Weatherfords, the LeFevre Trio, and the Harmoneers Quartet. In the late 1960s he sang with the All American Quartet. He was also a solo artist, often singing his own compositions along with offering homespun humor. After recording a solo album in 1962, Lumpkin sometimes toured with the Blackwood Brothers and/or the Statesmen who would sing backup when he performed his featured numbers.

Lumpkin's best-known composition is probably "Tell My Friends", which was popularized by the Weatherfords and other groups. As a performer, Lumpkin's most requested song was "Just One Rose Will Do."

Lumpkin passed away in 1987, a few weeks after suffering a heart attack. 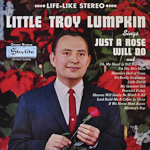 hi-res
1962 Little Troy Lumpkin Sings Just A Rose Will Do (Skylite Records/SSLP-6001): Oh, My Heart Is Still Rejoicing; Heaven's Hall Of Fame; It's Really Surprising; Heaven Will Surely Be Worth It All; Peaceful Valley; Just A Rose Will Do; I'm His, He's Mine; My Greatest Gift; Lord, Build Me A Cabin In Glory; Little David; If We Never Meet Again; Mammy's Boy.