Tim Riley hails from Gadsden-Glencoe, Alabama area. He began singing bass in gospel groups in the early 1960s. In 1966 he replaced J G Whitfield singing bass in the Dixie Echoes. However, after about one month he was drafted into the war in Vietnam and left to serve for the next four years. From 1966-1970 the bass slot in the Dixie Echoes was filled by Calvin Runion, Paul Downing, and Ken Turner. Tim returned in June 1970 when Turner left to join the Blackwood Brothers. Tim remained with the quartet for a little over 3 years until he left in August 1973. In 1974 he joined the Southmen Quartet with Jack Toney. He stayed with them for 5 years until he left in 1979. In July 1980 he joined the newly organized Gold City quartet where he remained for 24 years until retiring in July/August 2004. He still appears at some of the Gold City concerts, such as the National Quartet Convention and he filled in during the Spring of 2006 after Bill Lawrence left and before Aaron McCune came on board. For years he led the ministry with Compassion International. He was voted Favorite Bass Singer on several occasions.

In 2009, Tim rejoined Gold City full time as bass singer upon the departure of Aaron McCune from the group. 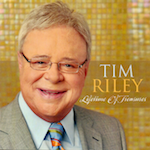 hi-res
2010 Lifetime Of Treasures (Custom Records/TMS-1376CD): God's Got Other Plans For You; Blessed Assurance; On The Sunny Banks; He's The Rock I'm Leaning On; When He Reached Down His Hand For Me; Have You Been Born Again; Under Control; What A Great Lifestyle; He'll Never Let Go Of My Hand; Signed, Sealed, Delivered; How Big Is God; Wonderful Time Up There.