Born on September 8, 1921, Lister was the son of Willis and Pearl Holland Lister. He became a musician at an early age with his father as a teacher, learning to play the violin by the age of twelve. When Lister was eighteen, he attended the Vaughan School of Music in Tennessee where he studied under Adger M. Pace, and G. T. Speer.

In 1946, Lister married Wylene Whitten. They relocated to Atlanta, Georgia, where he reunited with Wetherington to form the Melody Masters Quartet. When the Melody Masters left for Nebraska, Lister stayed in Atlanta. He became the lead singer for the first version of the Statesmen with Hovie Lister (no relation) in 1948.

Mosie Lister eventually gave up singing professionally to concentrate on his songwriting. In 1953, he founded Mosie Lister Publishing which would ultimately merge with Lillenas Publishing in 1969. In 1956, the Listers relocated to Tampa, Florida.

By the early 1960s, Lister's songs had been recorded by popular singers including George Beverly Shea ("How Long Has It Been") and Elvis Presley ("His Hand In Mine" and "He Knows Just What I Need"). When Presley released his second gospel album in 1966, it included another song written by Lister ("Where No One Stands Alone").

In 2001, the Booth Brothers recorded "Still Feelin' Fine," a sequel to the classic "I'm Feelin' Fine" that Lister had written years before. The new song helped cement the career path of the Booth Brothers. That same year, Lister's wife, Wylene, passed away after a battle with cancer. Lister would ultimately remarry Martha Hunter, the mother-in-law of Booth Brothers tenor singer Michael Booth. 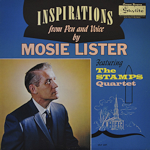 hi-res
1965 Inspirations From Pen And Voice (Skylite Records/SLP-6029): I Won't Turn Back; At The Crossing; How Long Has It Been; Nothing Can Compare; The Man On The Middle Cross; If You Believe; I've Been Changed; His Grace Is Sufficient For Me; If You Could Live Your Life Over; I'm Feeling Fine; When You Travel All Alone; Sometimes It Seems.