It proved to be a short-lived partnership. The following year, Casto, Singletary, and Dugger departed to form Tribute Quartet in the early fall of 2006. By November of 2006, Pugh had assembled a new lineup consisting of Matt Felts (tenor), John Tidwell (lead), Brad Smith (bass), and Lucas Case (piano). Pugh shifted from tenor to baritone.

In 2007, Pugh announced the group would be shifting its focus to fairs and festivals with a goal of filling the void left by groups like the Statler Brothers and Oak Ridge Boys who performed a mixture of gospel and secular country music. After another year or so and a few more membership changes, the group disbanded. 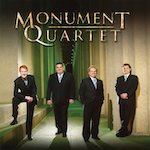 hi-res
2005 Monument Quartet (River Of Life Music Group/ROLMG-CD5052): Time To Rise; Cross Over Jordan; Roll On; When They Ring The Bells Of Heaven; Song Of The Redeemed; Some Day Soon; Who's Gonna Teach Them; Mr Darwin; Grace At It's Best; I Would Not Be Denied; Cleansed, Clothed And Crowned; Getting Ready To Leave This World (featuring Josh Singletary Piano Solo); It's Just Like Heaven (Marshall Pugh, Gary Castro, Josh Singletary, Dennis Dugger). 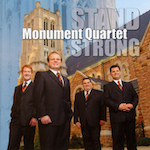 hi-res
2006 Stand Strong (River Of Life Music Group) Glory Hallelujah Song/The One Who Carried His Cross/Step Aside, John/The Climb/Go Right Out/Stand Strong/I Have Found The Way/Preachin' Man/One Thing God Cannot Do/Empty Pages**/God's Mighty Hand/Pray, Pray, Pray/Building A Bridge/Forever To Go**/What A Friend** (Marshall Pugh/Matt Felts, Gary Casto/John Tidwell, Josh Singletary/Marshall Pugh, Dennis Dugger/Brad Smith, Lucas Case) (Two versions of this CD were released. The first featured the original lineup of Pugh, Casto, Singletary, and Dugger (2006). The project was re-released in 2007 after the latter three broke off to form Tribute Quartet and Pugh moved to baritone and hired new vocalists and a pianist. Asterisks denote tracks that were only on the original release.)
All articles are the property of SGHistory.com and should not be copied, stored or reproduced by any means without the express written permission of the editors of SGHistory.com.
Wikipedia contributors, this particularly includes you. Please do not copy our work and present it as your own.