In late September, 2012, Jimmy announced his retirement from the Blackwood Brothers. 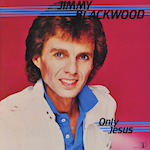 hi-res
1984 Only Jesus (Upward Productions/UP-70232-LP): He Is The King; I Will Lift You There; A Perfect Heart; No Other Name But Jesus; In This Very Room; He Is Worthy; We Shall Behold Him; Only Jesus.
All articles are the property of SGHistory.com and should not be copied, stored or reproduced by any means without the express written permission of the editors of SGHistory.com.
Wikipedia contributors, this particularly includes you. Please do not copy our work and present it as your own.