Jeff Stice was the pianist for Triumphant Quartet. He began with the Monitors Quartet in the early 1980's. Jeff then went on to the Blackwood Brothers in the mid 1980s, then worked for a while with the Nelons and then played piano for Perfect Heart from 1990-1998. In 1999 he joined the Kingdom Heirs. Three years later he left to become one of the founding members of Triumphant Quartet, where he remained until May, 2014. Jeff has also written many Southern Gospel songs, received numerous Singing News Fan Awards, and recorded many solo albums. 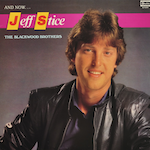 hi-res
1986 And Now... Jeff Stice (Skylite Records/SLP-6370): Chariots Of Fire; Still; When God Dips His Love; In The Garden; Goodbye, World, Goodbye; Bye And Bye; You Light Up My Life; When We All Get To Heaven; The One For Me; Alleluia, Jesus Reigns. 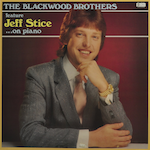 hi-res
1986 Featuring Jeff Stice On Piano (Skylite Records/SLP-6375): In The Garden; Just A Closer Walk With Thee; Medley; While Endless Ages Roll; Church In The Wildwood; When They Ring Those Golden Bells; Somebody Touched Me; Glorious Church Of God; There Is A Fountain; This Can Be Fun.

hi-res
1987 The Piano Artistry Of Jeff Stice - Give The World A Smile (Skylite Records/SLP-6383): There Is A Fountain; I've Got That Old Time Religion; Release Me; He's A Personal Savior; Jesus Loves Me (Medley); He's My King; I Go To The Rock; Give The Whole World A Smile; Leaning On The Everlasting Arms; When They Ring Those Golden Bells (Note: A special thanks to J D Sumner for singing bass on He's My King).

1993 People Need The Lord (Mark Five Records/MVCD8136): What A Friend We Have In Jesus; Sing Your Blues Away; People Need The Lord; I Surrender All; I'm Looking For Jesus; The Hallelujah Chorus; The Sound Of Music Medley; Theme From Exodus; Jesu Joy Of Man's Desiring. (This album contains a mix of Christian and secular songs).

???? Thoughts of Love: Somewhere Over The Rainbow; Misty; By The Time I Get To Phoenix; To Be With You; Theme From Somewhere In Time; As Time Goes By; If I Only Had A Brain; Last Date. (This album contains only secular songs).

???? Sharing - The Christmas Album: The Birth Of A Savior Medley; Excerpts From The Nutcracker Suite; My Favorite Things; The KenzieNickNat Medley; Angels We Have Heard On High; The Christmas Song; Carol Of The Bells; Sleigh Ride; The Hallelujah Chorus; A Medley Of Hope; Silent Night.

???? Classics: Joyful, Joyful We Adore Thee; When I Survey The Wondrous Cross; El Shaddai; When We All Get To Heaven; Chariots Of Fire; Fun With Chopstix; The Theme From Exodus; The Star Spangled Banner.

???? Hymns (SMR2042CD): Amazing Grace; Just As I Am; Blessed Assurance; Mansion Over The Hilltop; In The Garden; What A Friend We Have In Jesus; Jesus Loves Me; Sweet Hour Of Prayer; The Old Rugged Cross; When They Ring Those Golden Bells.

???? A Tribute to Floyd Cramer (SMR2121CD): The Old Rugged Cross; Power In The Blood; I Surrender All; Victory In Jesus; Oh How I Love Jesus; Love Lifted Me; Farther Along; Just As I Am; At The Cross; How Great Thou Art.

???? Rhyming Notes (Jeff Stice Music/JS8609): Til The Storm Passes By and You'll Never Walk Alone; There's Something About That Name; He's Worthy; Sweeter As The Days Go By; It Is Well With My Soul; Amazing Grace; How Great Thou Art; A Sinner's Plea; Joshua Fit The Battle Of Jericho; Home.

2007 In The Shadow Of Virtuosity (Jeff Stice Music): Jesus Saves; Bell Of Joy Keep Ringing; Georgia; Chopstix; Last Date; Autumn Leaves; Wait Till You See Me In My New Home; The Hallelujah Chorus; I'm Seeing My Father In Me?; What A Friend We Have In Jesus. (This album contains a mix of Christian and secular songs).

2007 From Broadway to Classical (Jeff Stice Music): Cabaret; Liebestraum; Fugue For Tinhorns; Blue Danube Waltz; Do Re Mi; Excerpt from Rhapsody in Blue; One; Prelude In C Minor; Don't Rain On My Parade; The Hungarian Rhapsody. (This album contains only secular songs).

2010 Antithesis With Affinity (Jeff Stice Music/JS8928): Down From His Glory; Love Lifted Me; Smile; God Rest Ye Merry Gentlemen; He'll Pilot Me And The William Tell Overture; The Wayfaring Stranger; Battle Hymn Of The Republic; First Day In Heaven; The Lord's Prayer; That's What Friends Are For?.

2011 My Piano, Your Sweet Dreams (Jeff Stice Music/A12019): Brahm's Lullaby; Twinkle Twinkle Little Star; Lavenders Blue; Minuet In G; If I Only Had A Brain; The Itsy Bitsy Spider; Somewhere Out There; Counting My Blessings; Rock-A-Bye Baby; This Old Man and Are You Sleeping; Hush Little Baby; Somewhere Over The Rainbow; Edelweiss; Prelude In C Minor; Jesus Loves Me. (This album contains a mix of Christian and secular songs).

hi res
2011 Me And A Piano (Jeff Stice Music/AI2020): There's Something About That Name; Wait Til You See Me In My New Home; Mansion Over The Hilltop; Goodbye World Goodbye; El Shaddai; What A Friend We Have In Jesus; A Sinner's Plea; Bells Of Joy; Jesus Loves Me; Sweeter As The Days Go By; When They Ring Those Golden Bells; Amazing Grace; When We All Get To Heaven; Home.

2012 The Christmas Mood With Just A Piano (Jeff Stice Music/JS-9377): Christmas Time Is Here; Let It Snow; I'll Be Home For Christmas; Sleigh Ride; The First Noel; Deck The Halls; You're A Mean One Mr Grinch; Counting My Blessings; My Favorite Things; Auld Lang Syne.

2019 Bridge: Praise The Lord; Love Lifted Me; Down From His Glory; Wayfaring Stranger; It Is Well With My Soul; First Day In Heaven; He's Worthy; Joshua Fit The Battle Of Jericho; That's What Friends Are For; 'Til The Storm Passes By.