Henry Thaxton Slaughter grew up on a farm in North Carolina. He began piano lessons at an early age. After finishing high school, he attended a music school conducted by the Stamps-Baxter Music and Printing Company in Chattanooga, Tennessee. At the school, his piano instructor was Herschel ‘’Frankie’’ Collins, who had been pianist for both the Dixie Four and the Lone Star Quartet.

By 1958, Slaughter had joined the Weatherford Quartet at Rex Humbard’s Cathedral Of Tomorrow in Akron, Ohio, joining a fellow former Stamps Ozark member, Glen Payne. After three years, he became the music director at the Cathedral of Tomorrow. Henry and his wife Hazel were on the staff there when they recorded their first two record albums. In 1963, Slaughter left his position at the Cathedral Of Tomorrow to help Jake Hess form the Imperials. He remained with the Imperials for three years, serving as pianist, arranger and featured songwriter.

After his stint with the Imperials, Slaughter worked part-time for a church in Nashville, Tennessee and worked as a keyboard artist in a recording studio. He then joined the Bill Gaither Trio where he remained for about seven years.

After leaving the Gaither Trio, Slaughter continued as a recording studio session player in Nashville and produced gospel records in his own recording studio. Henry and his wife Hazel pursued a vigorous touring and recording career throughout the 1970s and 1980s, billed as Henry and Hazel Slaughter. They retired from the road in 1990.

The Slaughters have remained active where they live in the Nashville area. They have made numerous appearances with the Bill Gaither Praise Gatherings and have been featured on the Gaither Homecoming Series.

In addition to the numerous recordings with the several quartets of which he was a member and those with his wife, Henry recorded six instrumental albums.

For Henry and Hazel's discography, see Henry And Hazel Slaughter. 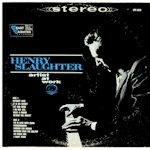 hi-res
1965 Henry Slaughter Artist At Work (Heart Warming Records/Benson Records/Stereo Version LPS-1816/High Fidelity Version LPHF-1817): Without Love; It Is No Secret; Let God Abide; I Do Not Ask; What A Friend; Beyond The Sunset; I'm In Love With Jesus; Overshadowed; Longing For Heaven; Mansion Over The Hilltop; No Other One; I Want Jesus. 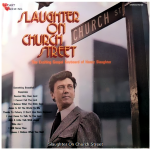 hi-res
1972 Slaughter On Church Street (Heart Warming Records/R3199): Something Beautiful; I Believe What The Bible Says; Remind Me Dear Lord; I Cannot Fail The Lord; Happiness; Jesus Is All The World To Me; Thanks To Calvary (I Don't Live Here Anymore); I Just Came To Talk With You Lord; Just A Little Talk With Jesus; Who Am I; I Will Serve Thee; Jesus I Believe What You Said About Heaven. (Henry Slaughter). 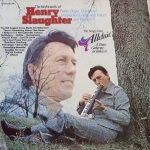 hi-res
1975 The Keyboards of Henry Slaughter (Heart Warming Records/R3307): Let's Just Praise The Lord; There's Something About That Name; King Of Kings And Lord Of Lords; Bethlehem Galilee Gethsemane; God Gave The Song; The Longer I Serve Him; The Old Rugged Cross Made The Difference; I Believe In A Hill Called Mt Calvary; Because He Lives; Something Beautiful; Get All Excited; Alleluia. (Henry Slaughter).

hi-res
1976 Thanks...I Think I'll Play One (Heart Warming Records/R3439): Thanks For The Sunshine; Gentle Shepherd; Gloryland Way; What A Precious Friend Is He; Tell Me The Story Of Jesus; Sheltered In The Arms Of God; Forever Is A Long Long Time?; His Hand In Mine; This Is Just What Heaven Means To Me; Justified; Greater Is He. 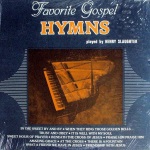 hi-res
1983 Favorite Gospel Hymns (Rejoice Records/R4001): In The Sweet By And By; When They Ring Those Golden Bells; Trust And Obey; It Is Well With My Soul; Sweet Hour Of Prayer; Beneath The Cross Of Jesus; There Is A Fountain; What A Friend We Have In Jesus/Friendship With Jesus. (Henry Slaughter)(also released as Shalom R4001).

hi-res
1983 Precious Memories - Featuring The Keyboards Of Henry Slaughter (One Accord Records/TO-5013): Precious Memories; Give Them All To Jesus; Jesus Is Lord - Medley: Jesus Be The Lord Of All/I Surrender All/He Is Lord; Each Step I Take; I Am Loved; He Was There All The Time; He Touched Me; Born Again; Room At The Cross. 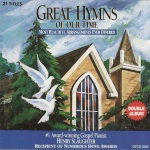 hi-res
1994 Great Hymns Of Our Time (Gospel Time Records/CD-5025): Lord I'm Coming Home; There Is A Fountain; How Great Thou Art; In My Heart There Rings A Melody; Just A Closer Walk With Thee; Nearer My God To Thee; In The Sweet By And By; Tis So Sweet; I Surrender All; When They Ring Those Golden Bells; Sweet Hour Of Prayer; When The Roll Is Called Up Yonder; Amazing Grace; What A Friend; Whispering Hope; Blessed Assurance; Precious Memories; Near The Cross; When I Survey The Wondrous Cross; Down At The Cross; At The Cross. (Henry Slaughter).

A Soul Like Me
Faith And Prayer
For Such A Time As This
God Takes Good Care Of Me
He Is So Great
I Played In The Band And Sang In The Choir
I've Never Loved Him Better
If I Had To Choose Again
If The Lord Wasn't Walking By My Side
It's Just A Matter Of Time
It's Worth More Than Anything
I've Never Loved Him Better Than Today
Jesus Is Always Near
Keep Faith In God
Lonely Mile
Look What's Happened To Me
More Precious Than Silver Or Gold
No One But Jesus Knows
Oh How I Love Him
Saved, Saved, Saved
So Many Times And So Many Ways
Take The World But Give Me Jesus
That's What Jesus Said
The Sweetest Hallelujah
Then The Answer Came
There's A Reason For It All
To Be Like Jesus
Walk With Me
What A Precious Friend He Is AKA What A Precious Friend Is He