Former Happy Goodmans members Tanya Goodman Sykes, her husband Michael Sykes, and Johnny Minick formed Goodman Revival in 2013 after a YouTube video of them singing "Until You’ve Known The Love Of God" sparked invitations from concert promoters to come and sing. They released a CD of mostly Happy Goodmans cover songs titled Songs In The Key Of Happy in 2014. 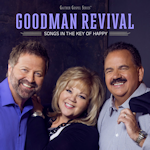 hi-res
2014 Songs In The Key Of Happy (Gaither Music Group): What A Happy Time; Eyes Of Jesus; Until You've Known The Love Of God; I'll Be Alright; The Sweetest Song I Know; This Is Just What Heaven Means To Me; It Happened; Settle The Score; Who Am I; I Don't Want To Get Adjusted; I Hold A Clear Title; I Wouldn't Take Nothing For My Journey; Look For Me (Tanya Goodman Sykes, Michael Sykes, Johnny Minick).
All articles are the property of SGHistory.com and should not be copied, stored or reproduced by any means without the express written permission of the editors of SGHistory.com.
Wikipedia contributors, this particularly includes you. Please do not copy our work and present it as your own.