Glen Weldon Payne was born in Royse City, Texas on October 20, 1926. He became a Christian in 1939 at a church a few miles from Royse City in Rockwall, Texas.

Payne developed an interest in Southern Gospel music at an early age. His grandmother wrote a letter to V O Stamps describing his love for music and explaining that their family did not have the financial means to send him to the Stamps Baxter School Of Music. Stamps responded, "Send him on!" His tuition was fully covered by Stamps.

After completing school, Payne joined Stamps Baxter Quartet in 1944 at the invitation of V O's brother Frank Stamps. (V O had passed away in 1940). Payne was still in his late teens at the time and the country was at war, so this first job singing was short-lived. He was soon called to serve his country in the United States Army.

After returning from military duty in 1946, Payne joined Lester's Stamps Quartet. In 1951, he moved to Wichita Falls, Texas to join another Stamps-affiliated group, the Stamps Ozark Quartet. Pianist Henry Slaughter was also a member of this regional group which usually sang in Texas, Oklahoma, and Arkansas.

Slaughter left the Stamps Ozark Quartet in early 1956 to and the group dissolved later that same year. In January of 1957, Payne joined the Weatherfords where he stayed until 1963. The following year, Henry Slaughter joined the Weatherfords and was reunited with Payne. (Slaughter had performed with the Tulsa Trumpeteers in the interim.) Based at Rex Humbard's Cathedral Of Tomorrow, the lineup of Earl and Lily Fern Weatherford, Glen Payne, Armond Morales, and Henry Slaughter remains one of the most critically acclaimed combinations in Southern Gospel history.

By 1963, Earl and Lily Fern Weatherford had decided to leave Humbard's ministry and relocate to California. Slaughter and Morales would soon join Jake Hess to form The Imperials. Payne opted to remain with Humbard's ministry where he formed the Cathedral Trio with Danny Koker and Bobby Clark. When George Younce joined the trio the following year, the group changed their name to the Cathedral Quartet. In 1969, the Cathedrals left Humbard's Cathedral Of Tomorrow to tour full-time.

For the next 30 years, Payne and Younce were the mainstays of the quartet. The Cathedrals struggled to make it financially for the first couple of years after leaving Humbard. Then, slowly but surely, they climbed their way to the top of the Southern Gospel industry. Aside from 1979 when Lorne Matthews, George Amon Webster, and Roy Tremble left at the same time, the Cathedrals generally experienced less turnover than most groups. This was particularly true in the 1980s and 1990s. Mark Trammell sang baritone from 1980-1990, and Danny Funderburk was their tenor from 1983-1990. Pianist Roger Bennett joined the group in 1979 and aside from a two-year break in the 1980s, remained with the Cathedrals until the group retired in 1999. Scott Fowler and Ernie Haase were with the group for their final nine years.

In 1999, Payne and Younce decided to retire the Cathedrals due to their age as well as Younce’s declining health. During their farewell tour that year, Payne was diagnosed with liver cancer and had to leave the road. Many fans remember the final performance by the Cathedrals at the National Quartet Convention in September when Payne called in from the hospital and sang a song from his bed. Payne passed away on October 15, 1999 just six weeks after his diagnosis. The Cathedrals opted not to bring in another singer to fill-in for Payne for their final few months. Instead, Roger Bennett sang Payne's part. Bennett later wrote a tribute song titled "Heroes Of The Faith" in honor of Payne and performed it with his new group Legacy Five.

The partnership of Payne and Younce continued to influence Southern Gospel music over the ensuing decades through groups owned by former Cathedrals members. These include Legacy Five, the Mark Trammell Trio, Greater Vision, and Ernie Haase And Signature Sound as well as Cathedrals alumni who had successful solo careers like Danny Funderburk and Kirk Talley.

Glen Payne was inducted into the Southern Gospel Music Association Hall of Fame in 1997. 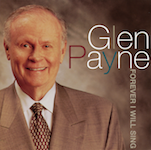 hi-res
2000 Forever I Will Sing (Cathedral Records/CH50012): Get On The Happy Side Of Living; I Stand Amazed; Heaven; Canaanland; Statue Of Liberty; Well Done; Old Man New Man; So Many Reasons; The Haven Of Rest; Big Boss; On The Battlefield; I Won't Have To Cross Jordan Alone.

2000 Out Front (Landmark Records HD0040): In The Depths Of The Sea; All The Glory Belongs To Jesus; Climbing Higher And Higher; At The Name Of Jesus; Your Blesser Ain't Never Been Blessed; High And Lifted Up; Ride That Glory Train; It's Almost Over; I'm Feelin' Fine; We Shall See Jesus.
All articles are the property of SGHistory.com and should not be copied, stored or reproduced by any means without the express written permission of the editors of SGHistory.com.
Wikipedia contributors, this particularly includes you. Please do not copy our work and present it as your own.