Garry Jones has had a long and distinguished career as a musician and singer in Southern Gospel music. He began his career with a short stint with the Dixie Echoes. He then joined Gold City and remained with that group for more than a decade. He served as pianist for the Old Friends Quartet, along side Southern Gospel legends George Younce and Jake Hess. Garry also was a founding member of both Ernie Haase And Signature Sound and Mercy's Mark, playing piano and singing baritone for the latter group.

2000 Timeless…Tradition (Gresa Music Works/4989): Tis So Sweet; Just A Little Talk With Jesus; Midnight Cry; If God Be For Us; Joyful, Joyful, We Adore Thee; Old Gospel Ship; There Rose A Lamb; Unclouded Day; God Bless The USA; It Is Well With My Soul. 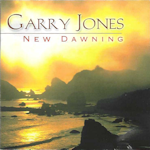 hi-res
2002 New Dawning (Garry Jones Music/11702); Awesome God; How Majestic Is Your Name; Butterfly Kisses; Peace In The Storm?; The Cross Medley; He Hideth My Soul; The Fall Of Jericho?; On My Knees; New Dawning?; Patriotic Medley; Change The World'