Ernie Phillips sang tenor for the Kingsmen Quartet in the late 1970s and early 1980s. His voice can be heard on several Kingsmen recordings including Chattanooga Live, Just A Little Closer Home, The Upper Window, Your Ride Is On The Way and Live...Naturally.

After his stint with the Kingsmen, Phillips traveled with Squire Parsons And Redeemed for a number of years and performed as a soloist. Phillips also sang with the Land Of The Sky Boys alongside original Kingsmen Quartet member, Raymond McKinney. In early 2012, Ernie temporarily returned to the Kingsmen, filling in until a new tenor singer was selected. 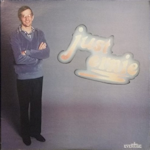 hi-res
1983 Just Ernie (Evertide Records/1031): I Don't Have To Worry; Lord Of Lords; Come Down Out Of The Boat; You Ain't Said A Word (Till You've Said Jesus); Time To Celebrate; Higher Ground; Believe In Your Heart; Ready And Waiting; One More Night With The Frogs; Glorious Church Of God.

???? Southern Gospel Favorites (Custom Records): When Crossing Time Shall Come; I Feel Like Traveling Home; What A Friend; In The Garden; How Great Thou Art; New Grace; Farther Along; Blessed Assurance; Children's Medley; Lord's Prayer.

???? Get Acquainted (Custom Records): Get Acquainted With The Lord; Oh, What A Savior; Out Of His Great Love; Faith Unlocks The Door; Since The Blood Has Been Applied; Some Sweet Day; What Would I Do Without You; There Will Come A Time; Friend Of Mine; Tears Are A Language.

???? Jesus Gave Me A Song (Custom Records): Nothing To Fear; Praise His Name; Jesus Gave Me A Song; I Know The One; If There’s A Crown For Me; Living By Faith; Heavenly Road; I Stand Redeemed; Old Time Way; Noah’s Hammer.
All articles are the property of SGHistory.com and should not be copied, stored or reproduced by any means without the express written permission of the editors of SGHistory.com.
Wikipedia contributors, this particularly includes you. Please do not copy our work and present it as your own.