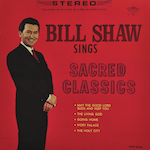 hi res
1965 Sings Sacred Classics (Steeple Records/STP-2502): May The Lord Bless And Keep You; When We All Get To Heaven; Ivory Palaces; It's My Desire; The Holy City; The Living God; I Wouldn't Trade; The Lord Is My Light; God Will Take Care Of You; Going Home.

2001 A Tribute To My Brothers (Custom Records): No Tears In Heaven; Above The Clouds; Put Your Hand In The Hand; My Name Is Jesus; Jesus Loves Me; Someday Soon; My God And I; Gentle Hands; Use Me; Give Us This Day; He Lifted Me; Over The Moon.